This is the second in the Hunger Games trilogy and it is as great as the first! For those late to the scene, the Hunger Games are a set of colosseum-like challenges set in an arena for the benefit of wealthy spectators in the Capitol of this dystopian world. Katniss and Peeta, the heroes from the first, have begun their life as Victors, but little do they know that the ruling bodies have plans for them… 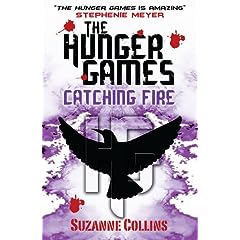 Is it science-fiction, then? Certainly. Is it full of techno-babble? No. Is it accessible for young adult readers? They are the main target audience but every adult who has read it has also enjoyed it. It is not as “romantic” as Twilight, has a wide range of themes which would be able to be talked about in class and has enough action to satisfy both male and female readers who might be easily bored. The characters are interesting and complex. Their relationships with each other move from reluctant tolerance to love to hatred and cannot be summarised easily. This is especially true when they move into the arena itself and have to forge alliances to survive the new tortures thrown at them  by the Gamemasters. It has a very Big Brother-ish feel to it, with a touch of Gladiators thrown in for good measure. People do die, so it is not the kind of book that I would suggest for young readers. This is not a world where characters get knocked unconscious and carried away by the police in a polite fashion. Life is harsh. Whole cities are destroyed. This adds to the power of the book(s).

Highly recommended and I am eagerly waiting for the next installment. More info can be found here…

The latest blockbuster novel has arrived and I have done my duty, finally finishing the 500+ pages last night. I will try not to reveal anything about the novel’s plot here but it basically follows a similar line to The Da Vinci Code, except it is set in Washington DC, not Rome/Europe, and is concerned with mysteries and conspiracies surrounding the Masons, not the Catholic Church.

Robert Langdon, the hero from the DVC, is back, called to Washington to deliver a lecture as a favour for an old friend, or so he is led to believe. He is then caught up in assisting various authorities in trying to unravel … you get the picture. He bumbles along at times, all the while sharing with us his vast knowledge of all things symbolic. More on that later. There is a villain, a particularly nasty guy as well as the usual array of supporting characters who tell us about more symbols and how they fit in the larger scheme of things.

The action is very condensed, happening in the space of less than 24 hours, yet it feels longer. This is due mainly to the number of recounts and flashbacks used to bring us up to speed with what has happened in the past. We find out about Langdon’s connection to the Solomon family, what happened at a few lectures he gave in the past, what happened at various Solomon family functions and so on. The rest of the book is taken up with small micro-lessons on American history, Masonic history, symbolism, geek-science and ritual.

That is the most annoying aspect of the book. While they are interesting, they tend to get in the way of the action. Characters are being chased by bad guys (or authorities) through dark buildings (the whole book happens during the night) yet they find time to lecture each other about what this or that means as they unravel the next clue. As a technique for building suspense, it works some of the time, but I mainly found myself going…”Yeah, whatever”…and moving on. OK, there are symbols on the American dollar bill, and I found out about suduko-like number squares and various Masonic rituals and the nature of Washington DC’s architecture and …. you get the picture? It is not just the sheer volume of information that annoys me, either. It is the preachy tone of the author intruding into the book. Some chapters open with a factoid about how many steps are in a particular monument or a particular property of a metal. These are written in present tense as if Brown wants us to go there and marvel like tourists. Then we go back to third-person for the action. Annoying.

I know that the book will appeal to some people. When I was younger, that may even have been me!

It has taken me some time to get around to it, but I have finally finished this series by Terry Pratchett. The books had been lent to me by a colleague and have dutifully sat on my shelves for some time, patiently waiting at first but then adding some guilt to the mix more recently. There are three books in the series, Truckers, Diggers and Wings and the follow a group of nomes (yes, spelt like that!) who are small people, around four inches in height (that’s about ten centimetres for younger folk!). Initially the small group of nomes we meet live in the wilds of England and we follow them from there to the floor of a department store where they meet other nomes. Of course, this creates confusion as both parties thought that each was the only group of nomes in existence! Maskelin, the most intrepid of the nomes, becomes the main character, though there are many others we can easily identify with. Their co-habitation with humans in the store raises questions about the nature of our own society as we come to see some of their traits in us. Blind faith in the way things are and the way things have always been done, mainly. It is up to Maskelin to convince the others that there are other ways of doing things and just because Arnold Bros. was built in 1905 does not mean that it will be there forever!

Diggers and Wings develop the story further. Just as a truck becomes an important icon in the first, an excavator is used in the second and planes/spacecraft are the device in the third. It will not spoil the story too much to say that nomes have come from “somewhere else” originally and have been stranded on Earth for a very long time, waiting for the right moment to return to wherever it was they came from. Helping them is the Thing, a small computer-like object which has been handed down frm nome to nome over the years. It eventually speaks to them, giving them advice about how humans and the world generally work.

Of the three, I enjoyed Wings the most, and not only because it meant that I could finally return the books! Maybe I was more used to the style. His writing reminds me of Douglas Adams, with a mixture of British humour and a tendency to throw in numerous asides to the reader, even including footnotes which explain things such as the relative life-spans of nomes and so on. Each chapter has a small preface which is an excerpt from some nome tome, describing how things work according to nome-ish legend. The humans have very little to do with the storylines, usually getting in the way of nome-progress or destroying things. The nomes see them as slow-moving and dumb creatures, generally.

Highly recommended for gifted readers. There is little in the way of violence, a lot of dry wit, clever use of language and style and an interesting array of characters. What could there be not to like?

As I finish yet another graphic novel, I think about the possibilities this genre has for teaching. In this instance, we get the potted history of “The Race to the Moon” and it is told from both the American and Russian perspectives.

The story moves between the two camps of scientists and includes various tidbits of knowledge beneath the frames and in side-panels. The Russians get a very cool font whenever they speak, while the Americans get a more conventional typeface. The style is heavily inked with little in the way of cross-hatching or shading.

It does add a touch of drama to the events! There are some slightly humorous touches, such as when the cosmonauts land off-course amidst a pack of wolves. That is one of the beauties of the genre. Little details can be told in a couple of frames and this instance we see the faces of the men as they scamper ba ck into the trees and the safety of their capsule.

I thought I might read it quickly but I ended up being engrossed in the human side of the challenges the men (and women) faced. We see them playing cards and talking about their homelives, just before pulling another all-nighter as they redesign the landing module. Overall, a very enjoyable read.

This linked site may be blocked at some locations but is worth checking out if you can. Shelfari has a series of features on authors and their bookshelves and this particular one is focussed on Neil Gaiman, author of Coraline, The Sandman and many other titles. If you ever want to feel envy about books, especially the ownership and display of them, then this is the time!

(I can’t recall where the original link came from…I must have read it somewhere but it does make you slightly jealous, doesn’t it? I wonder how he organises them, and how he finds a particular title!)

I guess everyone has their favourite picture books. What are yours? List-making is fun so I thought I would share my own Top 5 Picture Books (at the moment). Of course, as new titles are released or as you look back through a collection, you think, “I should have had that one!” or “I can’t believe I forgot that!”

So here goes…(in no real order)

And some close calls…

And I forgot about Colin Thompson and…

So have a go! What would you come up with?